On monday the lv.4 makers had to do a presentation in our groups in front of our project leaders telling them what our projects are for the city project. It went well, they said my idea wasn’t the most plausible to begin with and the relevance was a bit weak so after brainstorming with them they helped fix the issues we had with the idea and make it relevant. My idea was to create an underwater cityscape using panes of glass fixed together seamlessly with silhouettes of cities between them to give a layered staggered city, kind of like a shadow puppet scenery with it’s cut out foreground and back ground, but i’d be using glass transfers and frosted glass. Also i’d use a wooden base with LED’s and ceramic on top to be made to look like coral. To make it more relevant i’ll be linking it to Tryweryn, the sunken welsh village that was flooded to make a reservoir for Liverpool. The artist who inspired me is an artist called Emma Rawson who specializes in glass fusing and the inspiration i drew from was the underwater city of rapture in the popular video game Bioshock. It should be an exciting project. 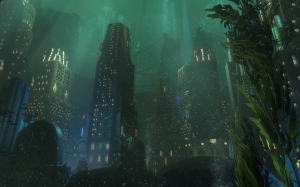